From now on we're proceeding according to the Star Trek "miracle worker" principle: 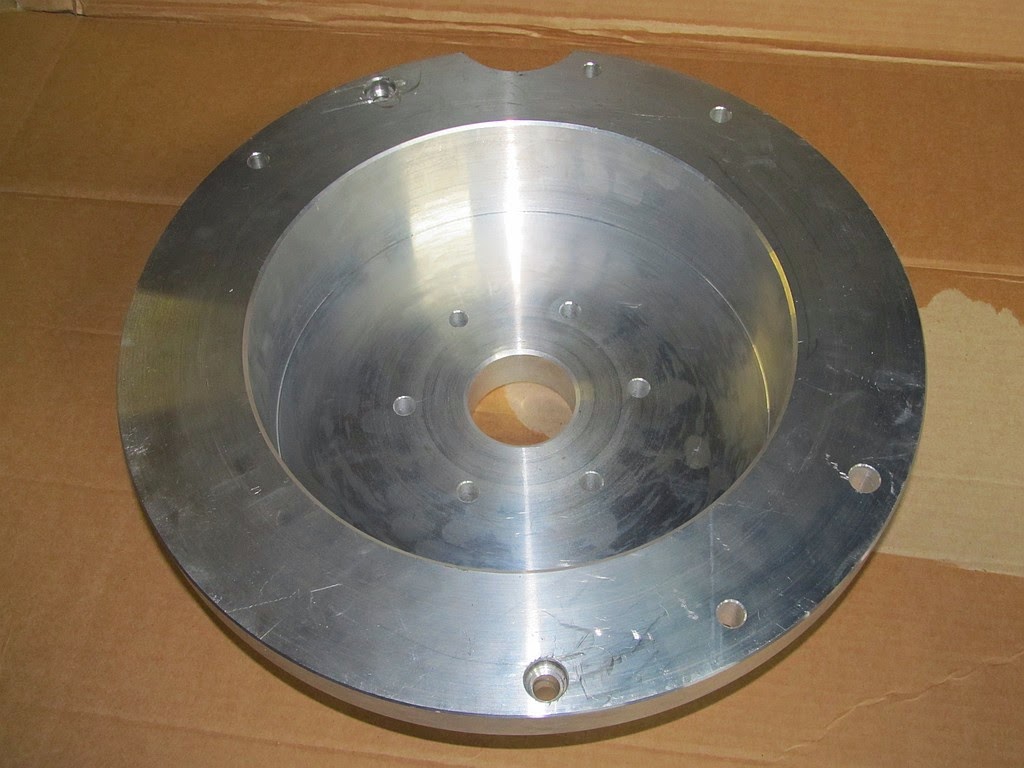 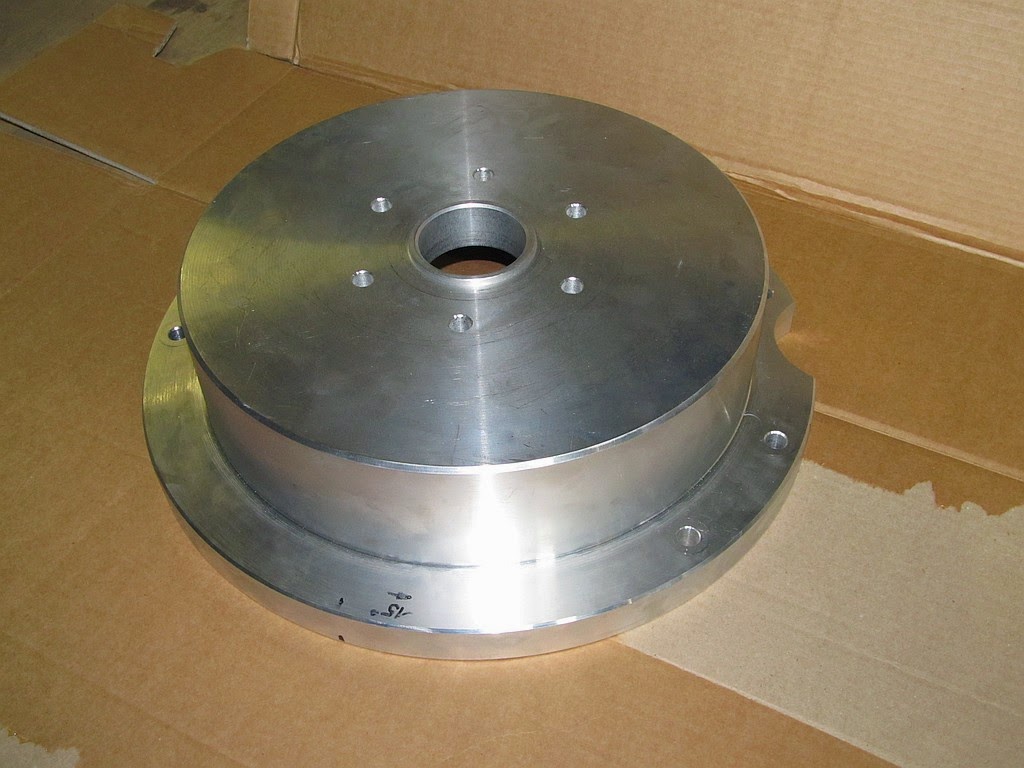 According to the speed things were moving in the last 6 months, it would have taken me another 6 to get the car moving again. But with some luck one of the companies in the Swiss Automotive Group (my new employer) was able to help me out of my biggest conversion misery: Some very friendly and supportive guys in Klaus AG provided the kind of help that Scotty usually does. Within 14 days, a great and robust looking adapter plate was fabricated out of a 32kg aluminium block. While neither Volvo nor Ford could provide me the dimensions of the transmission, the guys in Klaus AG found a great approach to make a custom fit. They also came up with a better idea for the coupler. As the Brusa motor has an involuted spline shaft, I was chasing an idea with a shaft, a taper lock and some adapter ring to mount part of the clutch disk to it (see previous post). The guys at Klaus AG had some doubts about a possible imbalance in the shaft and that the resulting wobble might have damaged the bearings of the motor or transmission in the long run. So with the help of the company Okey, we decided to create a custom shaft. One piece that fits perfectly in the motor and can be inserted right over the transmission shaft. Should be delivered in week 18. A bit more expensive, but if it might save my motor, I'm ok with it. At least I'll be able to finally spin some wheels in week 18 ! :) 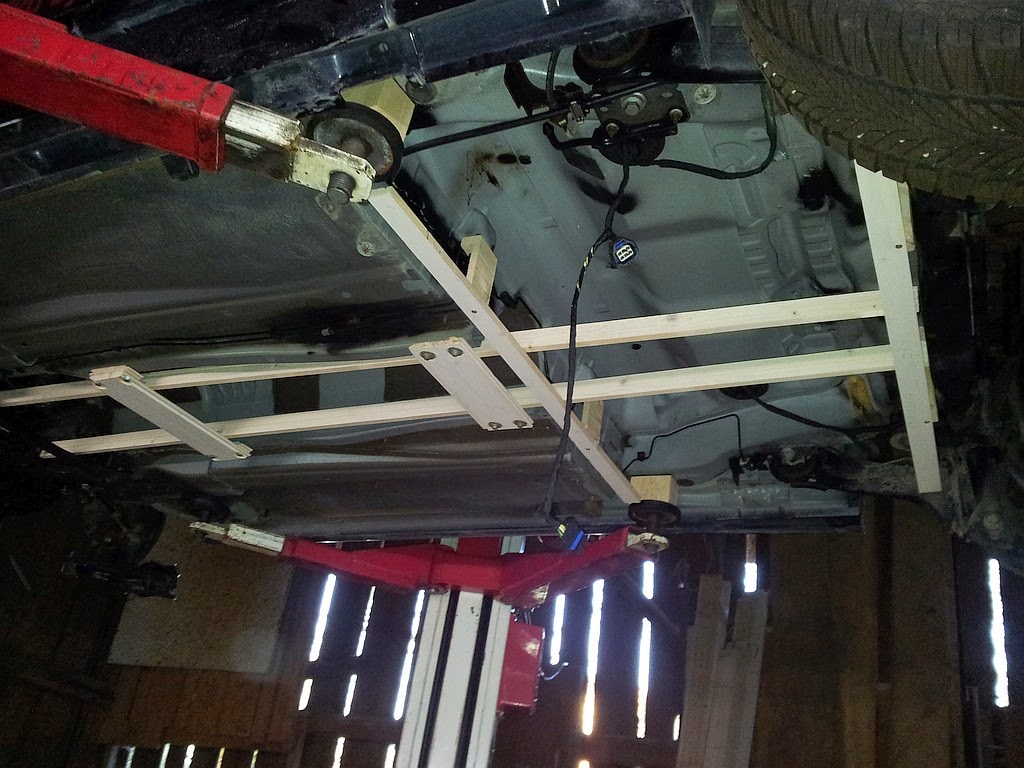 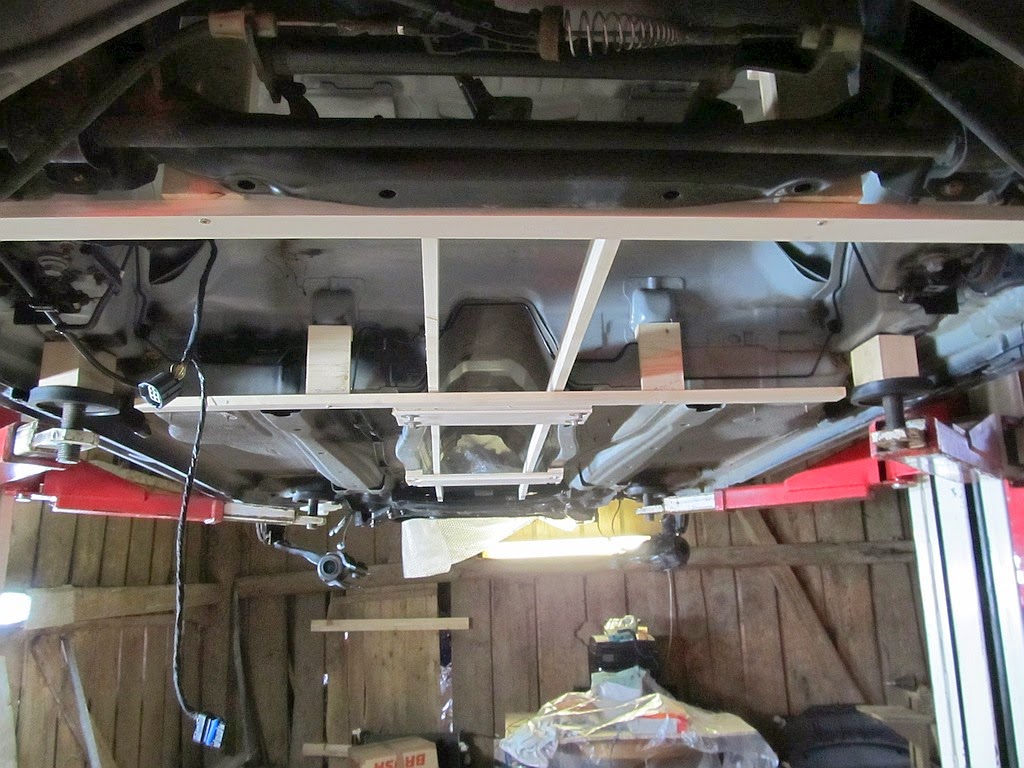 So with this problem almost solved, I only have two challenges keeping me from a first drive: the motor mount and the battery mount.
Inspired by the good news on the adapter, I had to move on with the battery mount. To keep the center of weight as low as possible and to save as much room as possible, I plan to use the tunnel of the exhaust pipe, the area of the gas tank and the spare wheel box before placing any cell in the engine compartment or the trunk. This will result not in one or two battery boxes but some special fabrication. I started with the cardboard box approach first as suggested by others. But I quickly found that it's just too soft and not fitting my requirements. As my brother-in-law is a carpenter and his shop is right next door, I started doing some template mountings out of unused wood. By using this wood, I found out how I can use stock mounting points in the car for a frame that holds about 40 cells under the car. In place of the wooden frame a metal construction out of L- or T-shaped bars will be used. They'll give the cells lateral and axial fixation. The cells will be lying on 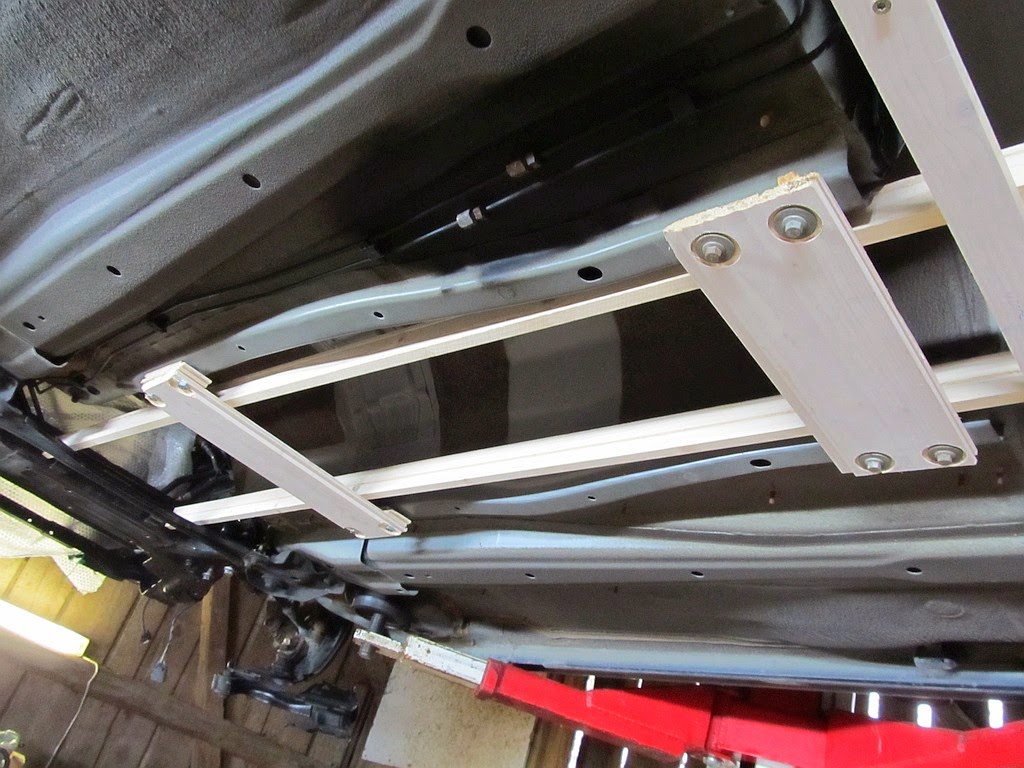 the side and strapped down to the frame. E.g. in the tunnel, I'll be able to place 3 pieces of 100Ah CALB CA cells per location. Three sides of the "battery box" will be provided by the car, so I only need to fabricate a insulated cover to protect the cells from the elements. I could even run a pipe, to be able to heat the cells and charge them at outside temperatures below zero degrees Celsius. The cells will be accessible for maintenance by removing the bottom cover. There's a disadvantage for this approach though: Instead of connecting many cells with straps, I'll have to do a lot of cables running from one block of cells to the next. 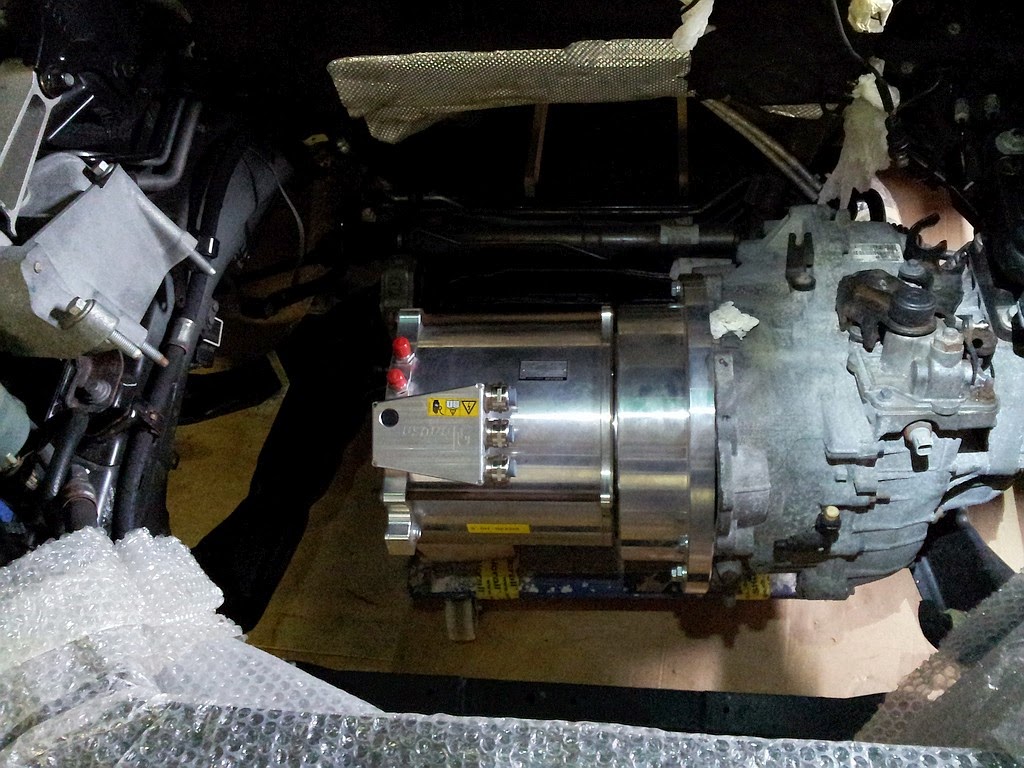 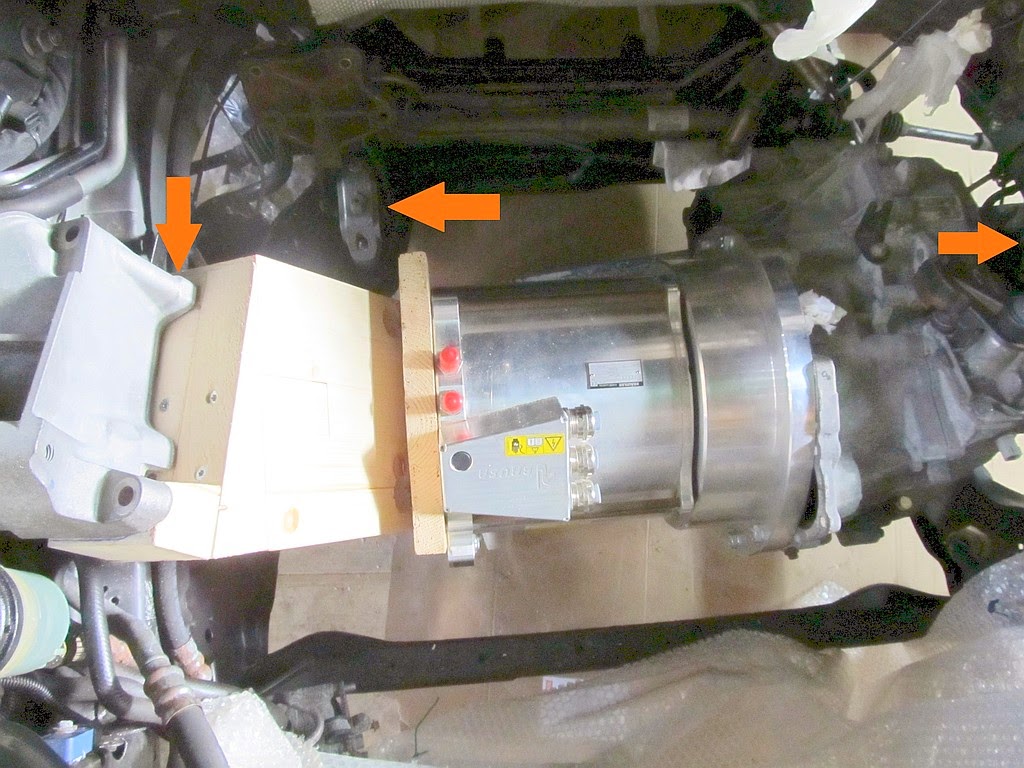 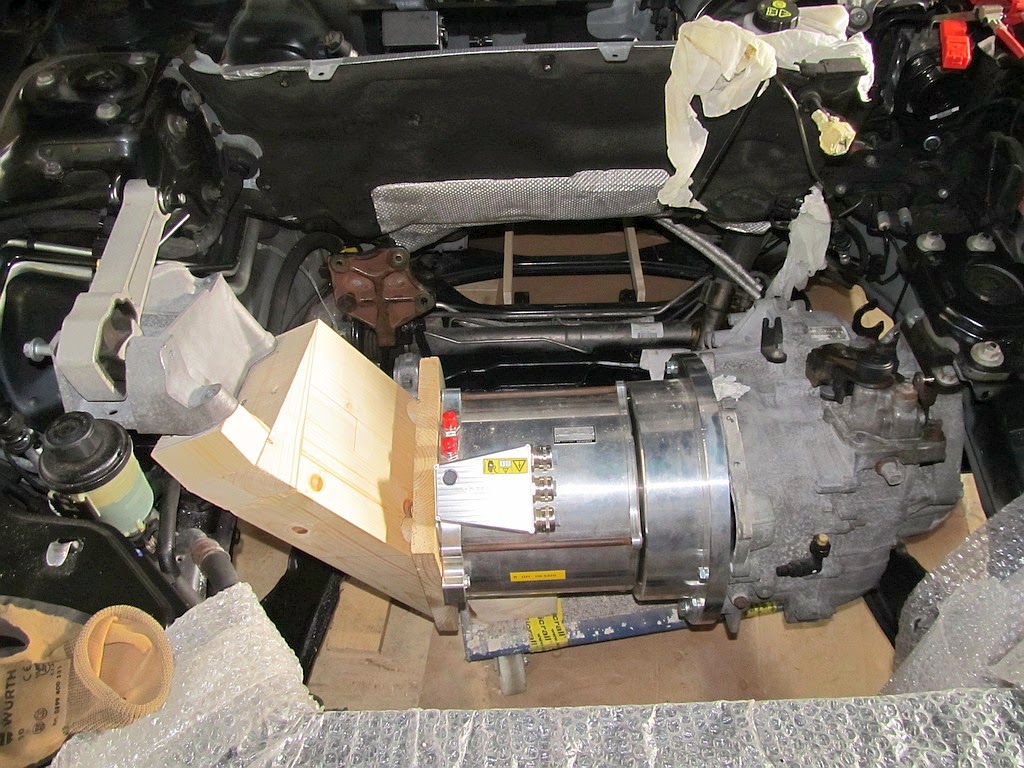 When the adapter plate was ready, I had to stop my battery placement invention cycle. The parts were quickly assembled and the combination of transmission, motor and adapter plate was placed on a board with wheels (again, thanks to my brother-in-law) and placed under the engine compartment. By lowering the car lift carefully, the parts slid right into place. After 2 hours adjusting the angle and height of the transmission, it was mounted in its original place. By adjusting the height of the lift again, I aligned the other end - the motor - level to the car frame. Instead of mounting the motor directly to the car frame, I want to re-use the three stock engine mounts to keep things flexible and able to absorb shocks. The one on the left used to carry the major part of the weight and gave also some stability on torsional forces. The one at the bottom of the frame carried a mounting bracket for the long wheel shaft and was also likely the main actor in picking up torsional forces. Sitting there and looking at the various strange angles, I tried for hours to figure out a way to mount the parts. Then I decided to continue with wood. After 8 hours I created a make-shift construction which I think could carry the weight and the torsion forces (when made out of metal of course).

So if all goes well, I might be able to stick with my original target and get the car moving this spring (although I originally planned for the beginning of spring, not the end).