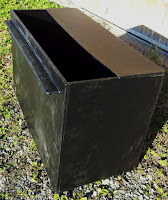 Based on input from Walter Fassbind I contacted www.fahrzeugausbau.ch. Within a couple of weeks, they created a wonderful battery box made of black PE (poly ehtylene). The 1cm thick walls are perfect electric insulators and so strong, they hold up 9mm bullets. Once the walls are welded together, the connection is almost unbreakable. In a test with two pieces, the size of a hand, welded in a 90 degree angle, they drove over it with a car. The plates almost flatted out but didn't break and returned back to the original form almost immediately. In my opinion this is the best and safest material for battery boxes - although it doesn't stay 100% inherently stable when hot and is also inflammable, the stability is good enough and you'll have to use a bunsen burner for about 1 minute to get it burning. Plus, the box can be made 100% water proof! You can treat the material with the same tools as wood (fad, drill, knife, rasp, ...). The only down-side is that you can't glue any other material to it - but bolts for wood work very well. (sorry, it's a bit dirty on the pictures to the right)
In my original design I wanted to add two internal walls to support the floor of the second level. But after consideration, we decided to let the 2nd floor just rest on the bolts of the batteries on the 1st floor. This means one cell will rest its weight on top of another. That's not much load and shouldn't cause any problem - I hope. But it safes space which is critically low - especially in the vertical. The box with cover has to fit under the front end. And there it really is a matter of millimetres. I had to file off some edges to make the box fit under the front.
The box rests on a U-shaped aluminium bar (35mm x 80mm x 4mm, length 108cm) and is bolted down with 3 M8 countersunk bolts. The bar is mounted on the original mounting brackets of the radiator (cyan marked part in diagram). Another two countersunk M6 bolts attach the box to two latches of the bumper (just below the horns) for additional lateral stabilisation. Aside from the aluminium bar the box also rests on the thinner bar of the sub-frame (black arrows in second diagram). So the weight is distributed between the two bars.
The guy creating the box also came up with many other great ideas. E.g. we've added a lid to the upper rear side of the box to support the device board. This solved another big issue on how to mount the board in an engine compartment with almost no straight lines. Now I only have to add a couple of angles to the firewall and the entire board is sufficiently supported. The white board template is currently being converted to an aluminium board by www.fahrzeugausbau.ch. The Eberspächer heater will be mounted to the bottom side of the board, just above the motor.
So aside from a small battery box in the rear (spare tire compartment) the HV distribution is getting finalized and ready for use. With a cover for the mid-section batteries and the power-steering connected I can start to plan a test for street readiness. :) *joy* 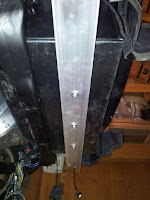 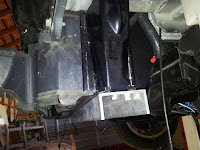 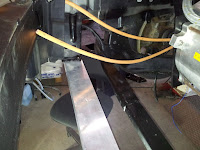 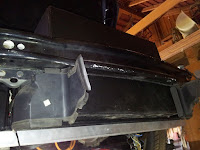 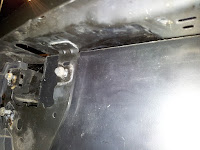 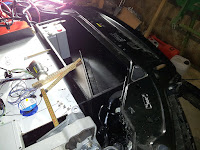 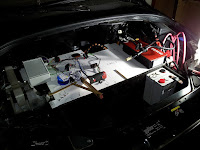 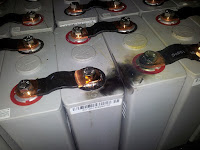 Ever heard these well intended hints : 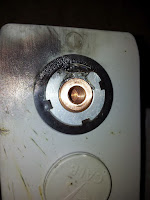 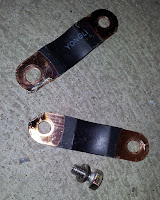 How serious did you take these advices? Honestly? Well, I respected them partially. I've seen the spanner creating a short over the poles of one single cell (at 24:30). After 10-20 seconds it was glowing white from the heat. So I was really really careful when installing the batteries. Also when I took them out of their provisional enclosure last weekend. I held on every strap I loosened so it couldn't turn and create a short. I reminded myself at least 5 times during the first ten minutes: "Be careful! Concentrate!". And yet, I made a serious error: I removed one bolt from a strap completely and only then started loosening the second bolt. The strap slipped out of my hand and created a short with a cell in the next row - over about 15-20 cells in series. Oh my! I won't forget that crackling sound and the feeling. It' possible that I imagined it but it felt like I could feel the magnetic field. I believe it took me less than half a second to grab the strap again and break the short. The result can be seen on the pictures and the video. Fortunately just 2-3 minutes before, I put on gloves to protect my hands from physical injury (scratching those bolts can tear your skin). The copper on the straps melted immediately and sprayed around the trunk in little liquid drops. On one picture you can see them and their burn marks in the carpet of the trunk. Imagine these drops landing on the skin or worse into an eye. I was wearing only my glasses which cover only about 70% of the area. Also discovering drops of copper below the emergency vent caps of some cells and looking at the black trails on the battery casing, I consider myself extremely lucky not to have gotten injured. 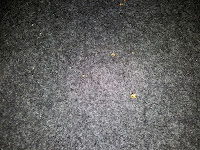 Once the smoke cleared from the trunk and I was sure nothing would happen any more, I had to take a walk outside - with weak knees. Next to the car stands a wagon filled with hay - imagine sparks flying over. I also remembered mounting the cells under the car. It was all done over-head, no hat, no eye protection. Believe me, I'd never do it that way again! At least a chap and full eye protection are a must - like it is for over-head welding. 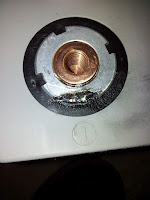 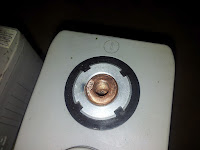 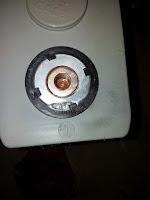