Long time no update - sorry, I've been quite busy.

As my design contained 4 bus bars with 5 connection points, I investigated alternatives to purchasing them - and spending about 400.-. Looking through the collection of left-over pieces in the metal shop, I quickly found a copper bar with a surface of 2.5 x 2.5 cm. The length was enough to be cut into 4 pieces. Costs: 40.- including 20 inox M8 screws and nuts. At www.swiss-composite.ch I bought 1L of resin they use to cover electronic parts for another 40.-. It stays flexible. Good in environments with vibrations but as I found out today, if you want to tighten the screws down, they start to slip within the hardened resin. Probably a hard one would have been better.
So, the costs were about a fifth of a retail product but the process was really fun and the "I'm proud" factor is quite significant. Check out the video how to do it. 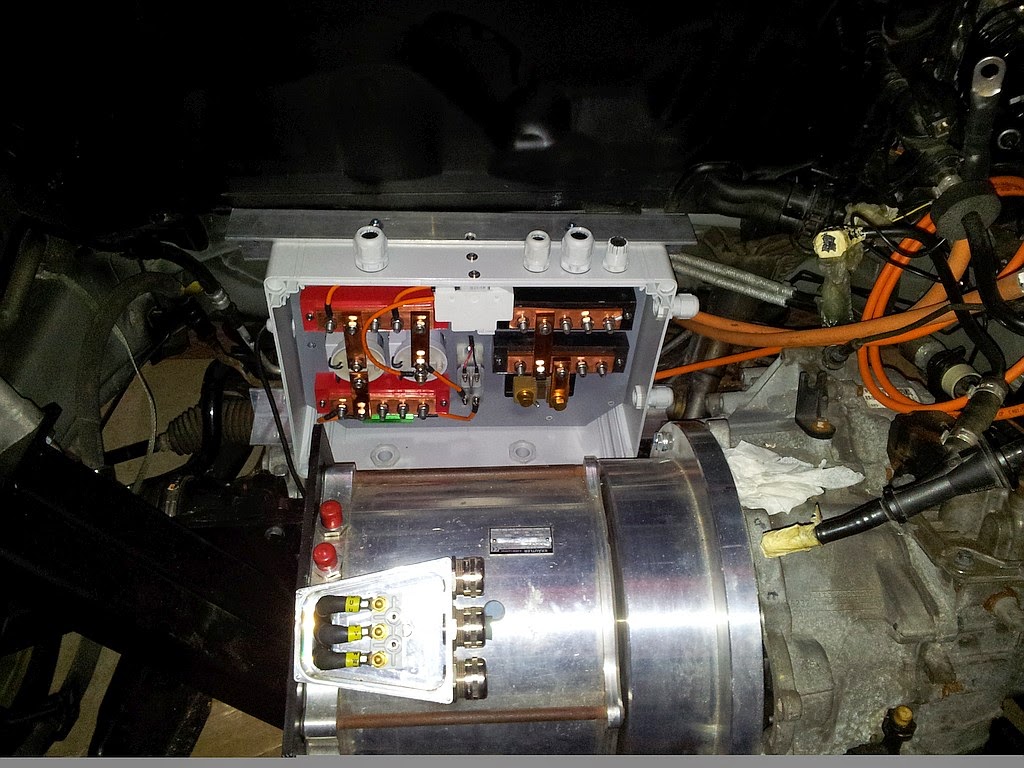 I'm also pretty proud of my HV distribution box. In the centre are of course the four bus bars and two contactors. On the upper/visible layer all HV connection points are made: from battery to contactors and then to motor controller and via fuses to JLD404, DC-DC converter, charger, heater. All 12V lines are immediately routed to the lower layer in order to separate the connections as good as possible (should one become loose). The main path is covered with copper bars. The low-power wires are short enough that they don't cause a short if one end comes loose. The end result is pretty heavy - about 7kg. With an aluminium L-profile on the top and bottom of the box, it was fairly easy to mount it in the car. 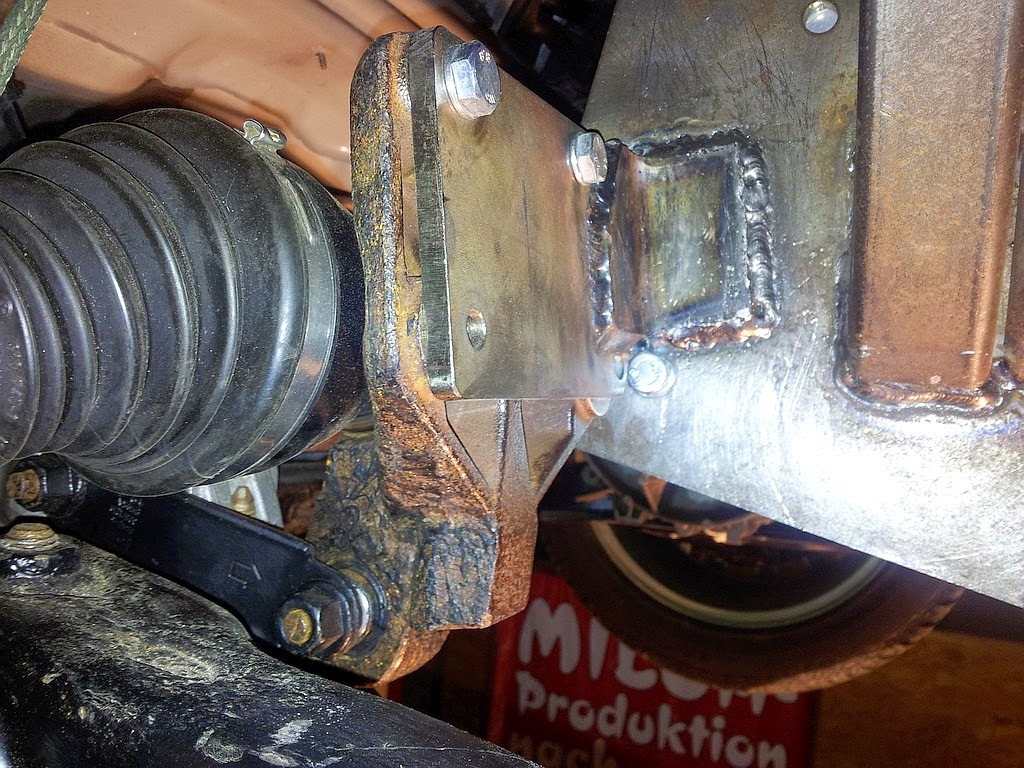 This is definitely the area where the most effort was invested in and where the most time was lost. After spot welding all parts and then welding them down, everything got twisted and the bracket which hold the drive shaft in place no longer fit. Cut it of, weld again and then it was ok. But while the motor was resting on a block of wood on one side, I could not lift the car anymore and work almost came to a stand-still for several weeks. But now it's finished, painted black and fitting perfectly. I got some fantastic support from Peter and Reto at www.klaus-ag.ch - Thanks a lot !! Check out the video on the first spin of the wheels. 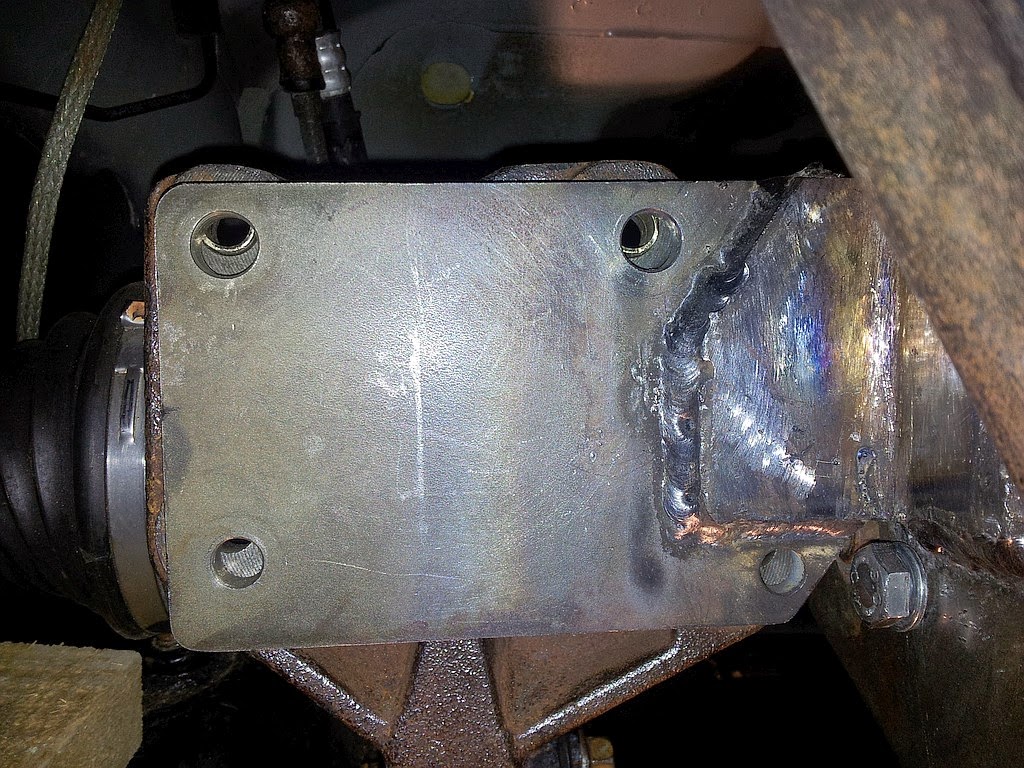 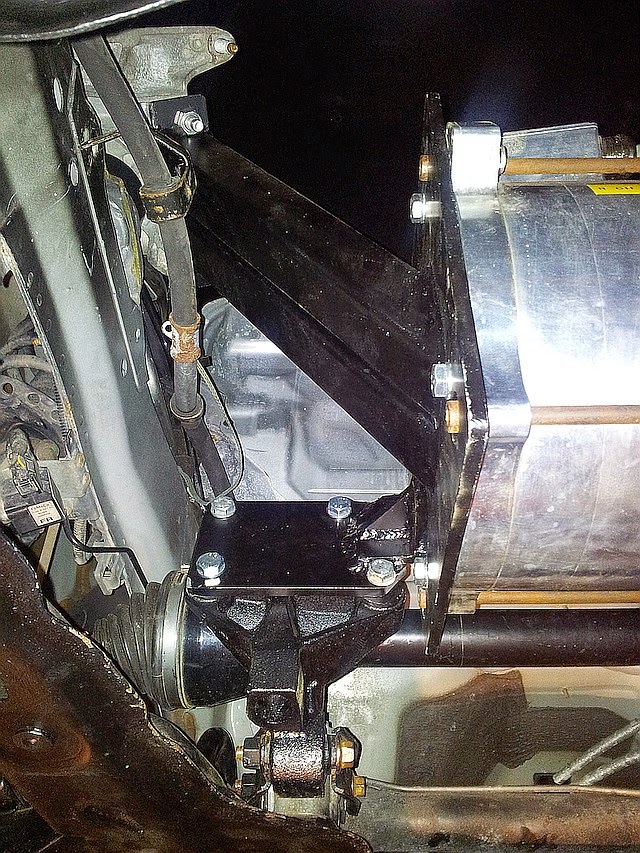 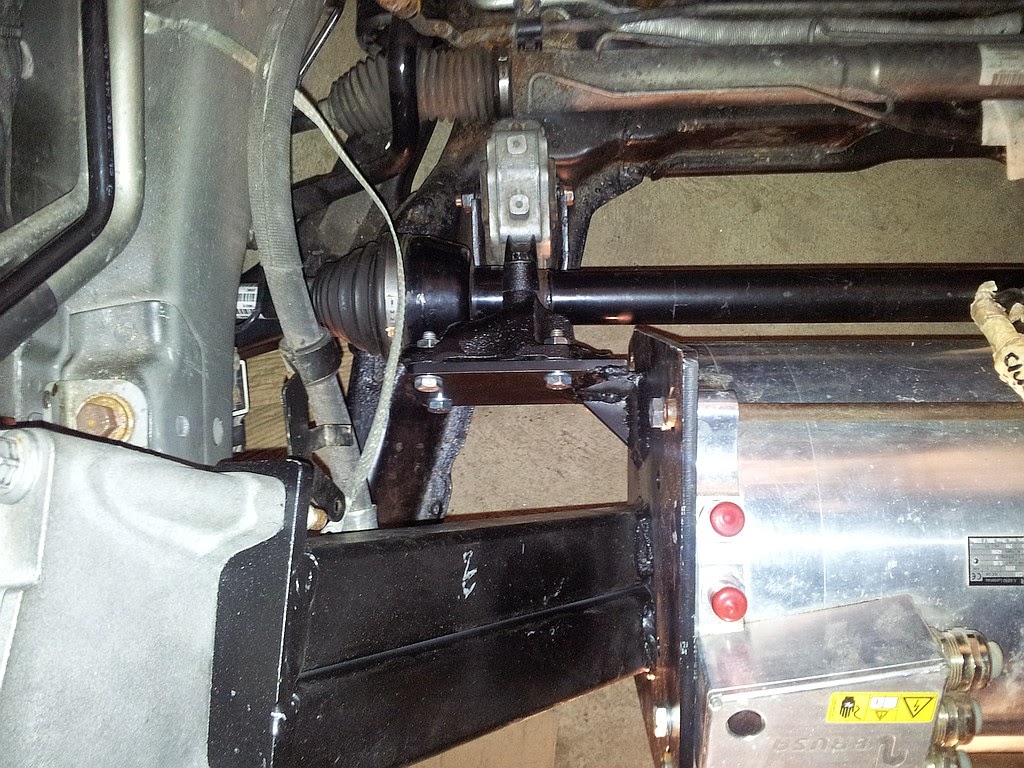 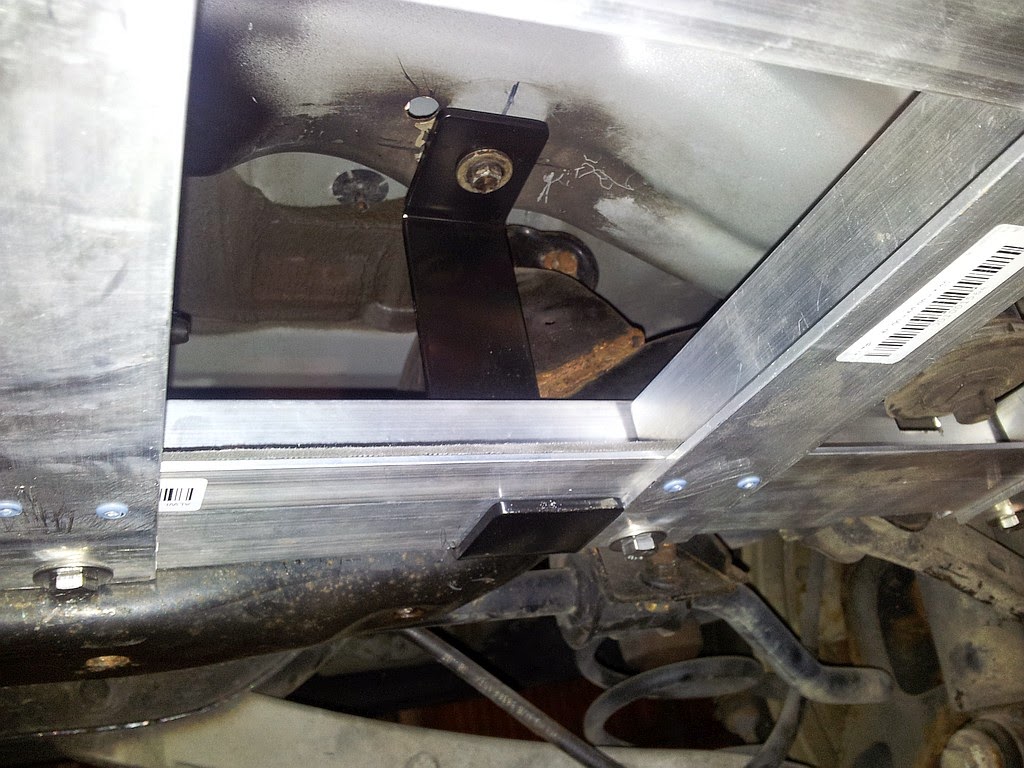 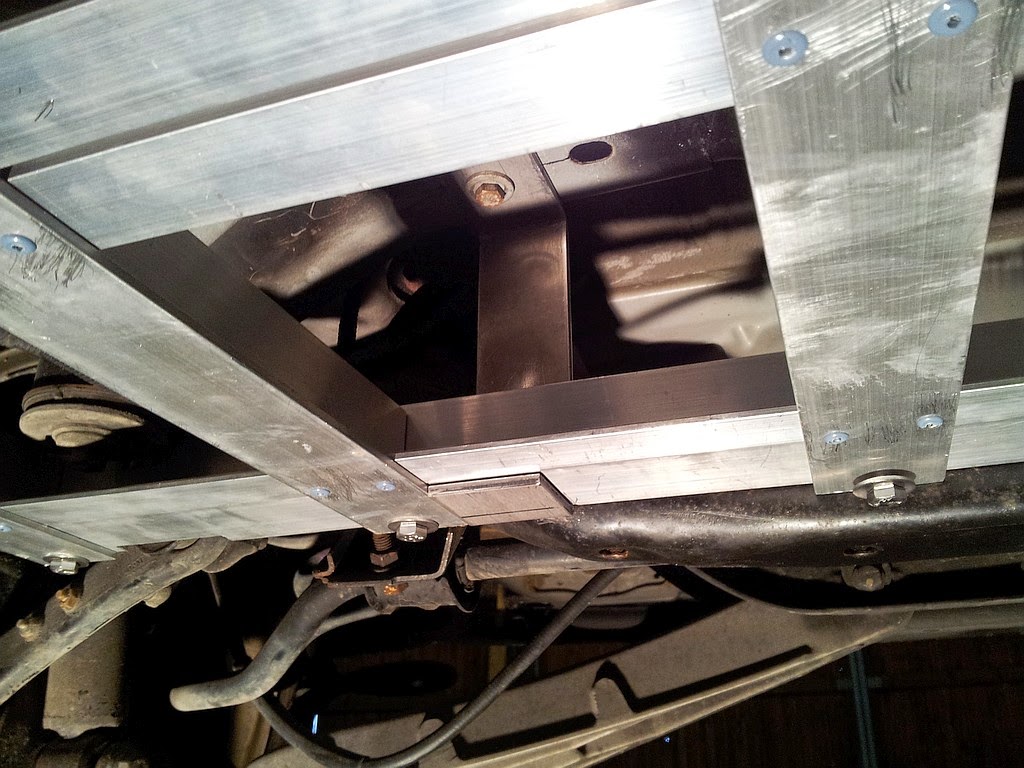 As I could not lift the car, finishing the battery bay under the car also had to wait. But now the final mounting brackets in the rear are in, the whole construction is rock solid.

When I wanted to order the Nordlock washers for the batteries, I was kindly invited for a visit to the branch in Switzerland. The sales representative wanted to do some tests with different types of washers in their lab. Although it would be beneficial to have a zink coated washer to serve as a sacrificial anode, it is not recommended. The washers don't show the nordlock effect but slip on the copper/aluminium. Also bigger washers than the screw's head is not recommendable. One might think it was because it distributes the forces more evenly. But also there the washers slipped on the copper strap instead of biting into the metal. With my CALB CA100 and copper straps, the best results were achieved with 25Nm torque and simple M8 inox washers. Refer to the video.

After having my batteries resting for 1 year with 50% SOC (from factory). most of them were in the same range with their voltage (see chart). The voltage of about 8 was considerably lower. So I suspected an internal soft short which slowly caused them to self-discharge. As I follow the philosophy of of bottom balancing and not using a battery management system (aka "battery murdering system") a internal soft short in some cells would become  problematic because they would fall out of balance and be under-discharged at some point - causing damage to them and become dangerous when charging them again.
After 5-8 cycles per cell I got them all discharged to 2.750 V (+/- 0.005V). With a Cellpro Powerlab 8 it took about 2 months. A most noteworthy effect is that the cells voltage climbs up for several weeks afer a discharge. Usually around 3-8mV per week. The 8 cells with a suspected soft-short drifted downwards after a discharge (whereas the others went up). They loose about 3-30mV per week after 4 weeks. As recommended by Jack Rickard, I charged them to 4V. My theory is that the so caused volumetric expansion might brake the dendrites which cause a soft-short. The cells were charged and now discharged to 2.75V. 7 of the 8 cells are still climbing in voltage which is a good sign. One is clearly gone. 3 days after the final discharge cycle, its voltage tumbles down. This one definitely won't go into the car. The others might in an easy accessible area (for monitoring and replacement). 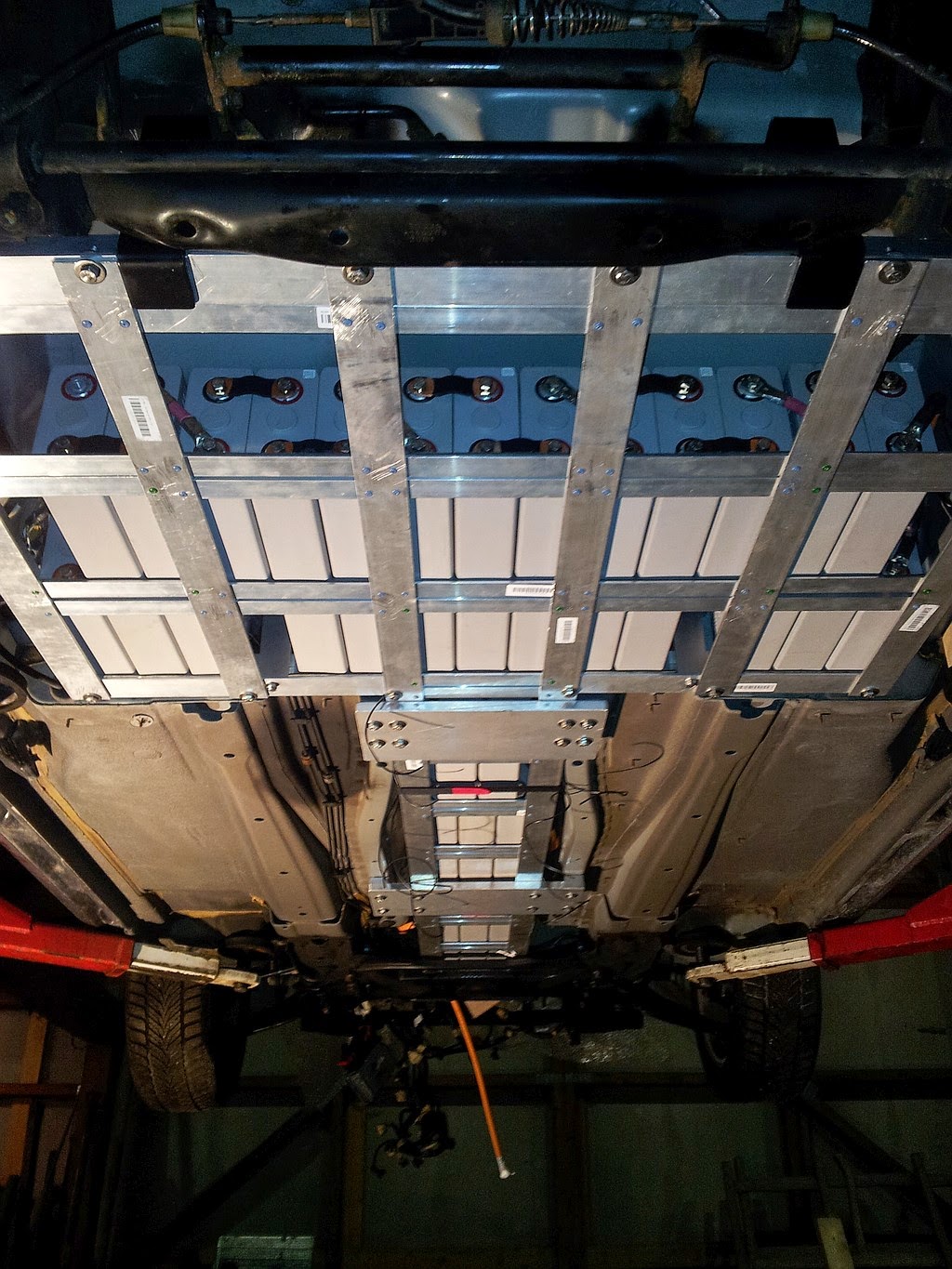 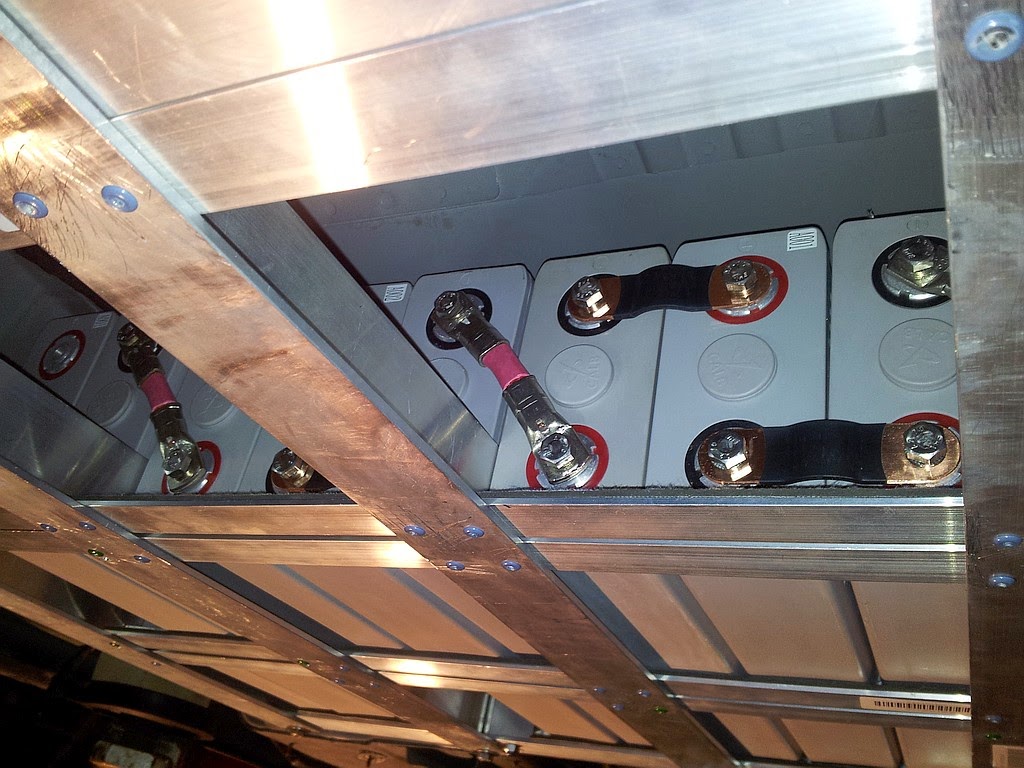 I installed the batteries in my construction. I the exhaust pipe tunnel, I had to use a hammer to widen it a bit in order to be able to install 2 more cells. Groups of 2 or 3 cells are interconnected with cable bridges. There were a lot of space related problems in area where the gas tank was. The distance from one row of cells to the next was too small. I counted for the bolts but not the thick cable shoes and cables. As I was out of options and didn't want to give up, I had to flatten the cable-shoes. I used a parallel vise to squeeze them so they become more flat. In the process I destroyed one vise. Also about 40 of the bolt heads had to be grinded down to half of their thickness. All this caused a lot of unexpected delays. In some areas the top of the batteries/bolts/shoes/cables are in contact with the bottom of the next row of batteries. No problem regarding HV security but accessing the terminals to verify the voltage has become impossible. The batteries are fixed very well laterally. But they might jump up when driving over a bump. To prevent that, once I'm happy with the installation, I will cover the batteries with plastic and then fill the gap with expandable construction foam. Also the bottom of the construction has to be covered with plastic plates to protect the batteries from salt water and stones. I'll also have to re-route the drain of the AC system - otherwise it would drip happily on my batteries.
I was able to fit 53 cells under car. For now I will put the remaining cells into trunk - only for a couple of test drives. Then they'll have to go into a battery box in the engine compartment. 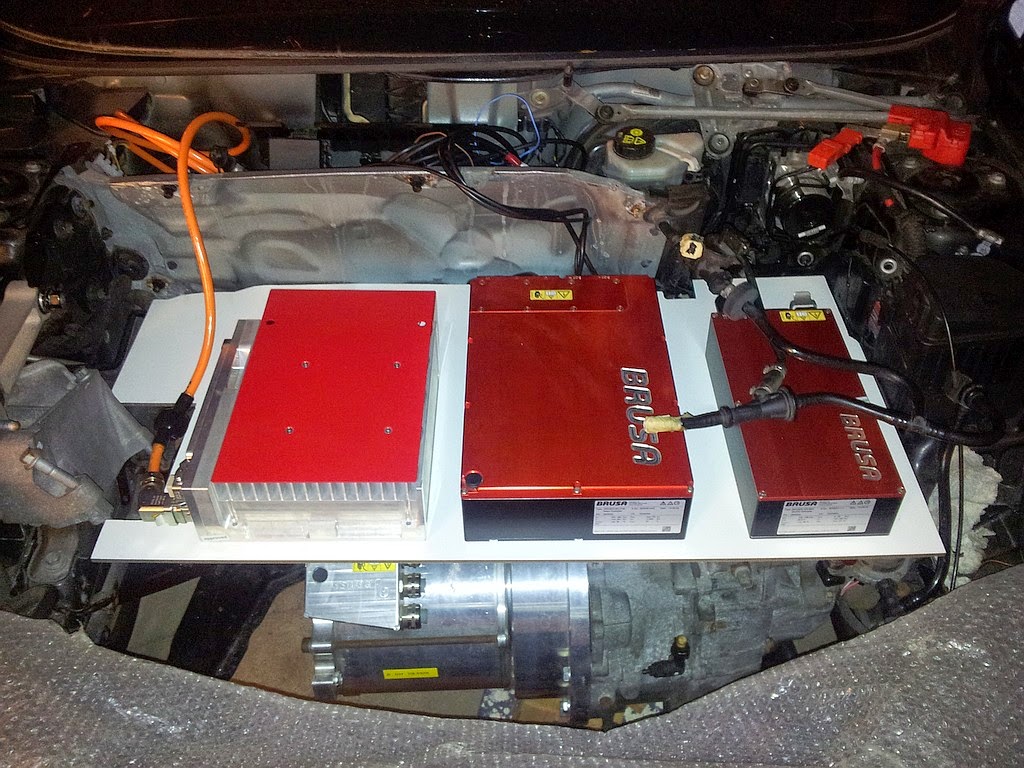 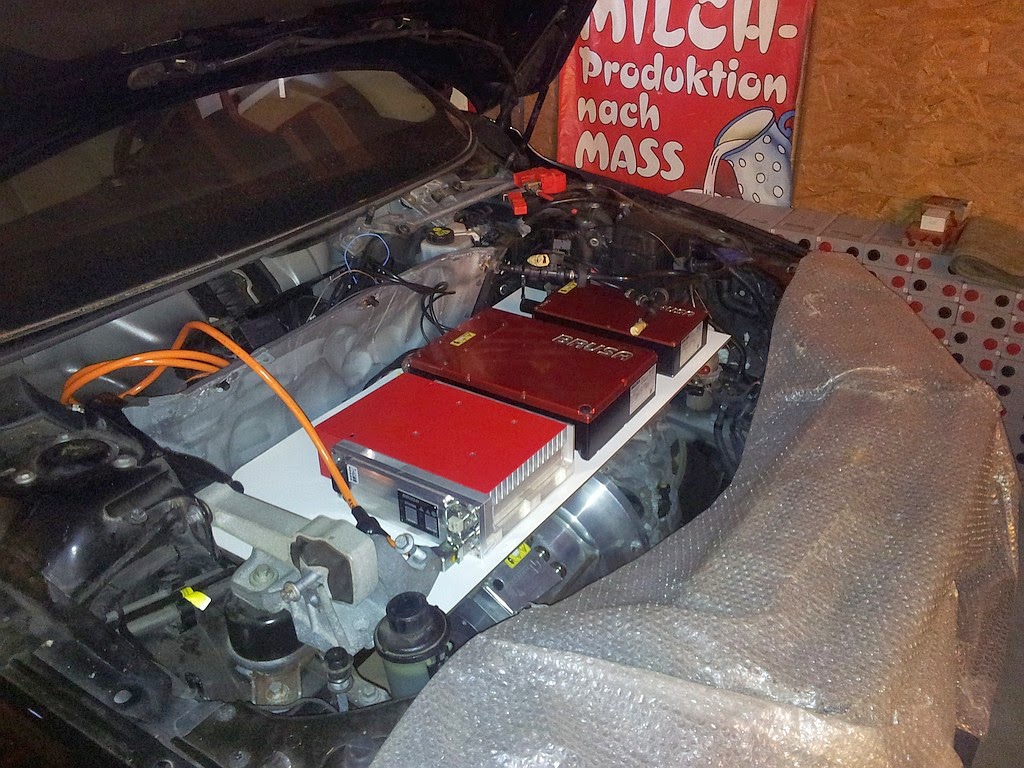 In order to envision how to mount the motor controller, dc-dc converter, charger and GEVCU, I created a prototype board out of wood. One I'm happy, it will be replaces with an aluminium plate. If somehow possible, I'll attach hinges in order to be able to lift/tilt the entire construction and reach the motor and the HV box. It's a real challenge though, as in these modern cars, there are not 90 degree angles, no straigth lines.. everything is curved.


Temperature and I/O extension for GEVCU 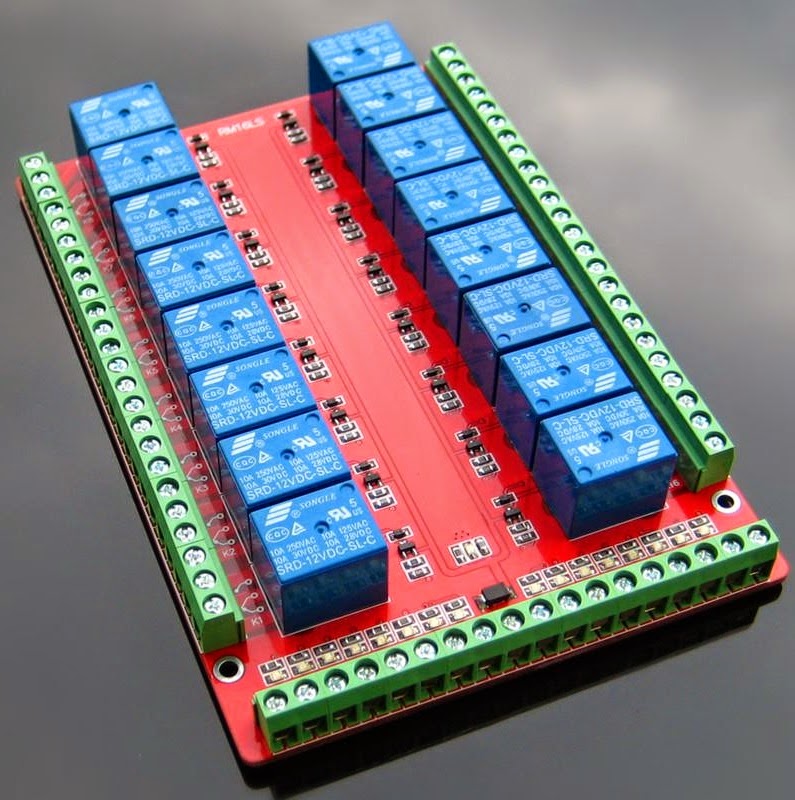 The GEVCU offers 8 digital outputs. Although they use MOSFET's to drive them, it's not recommended to use them to drive a Kilovac/Gigavac contactor directly - because of the high inrush current. Because of that and because I'll need more than 8 output channels, I bought myself a 16-channel relay board for Arduino Due's. They're almost free on ebay (18-36.-). This board with it's own Arduino Due will talk to the GEVCU and listen to commands via CAN bus to switch the various relays. I'll also use 4-6 single-wire temperature sensors. They will measure the temperature of the batteries in various areas. The extension box reports the temperatures via CAN bus to the GEVCU, which in order will control the charge process and not charge below 5 deg C but heat the batteries first with a water heater. 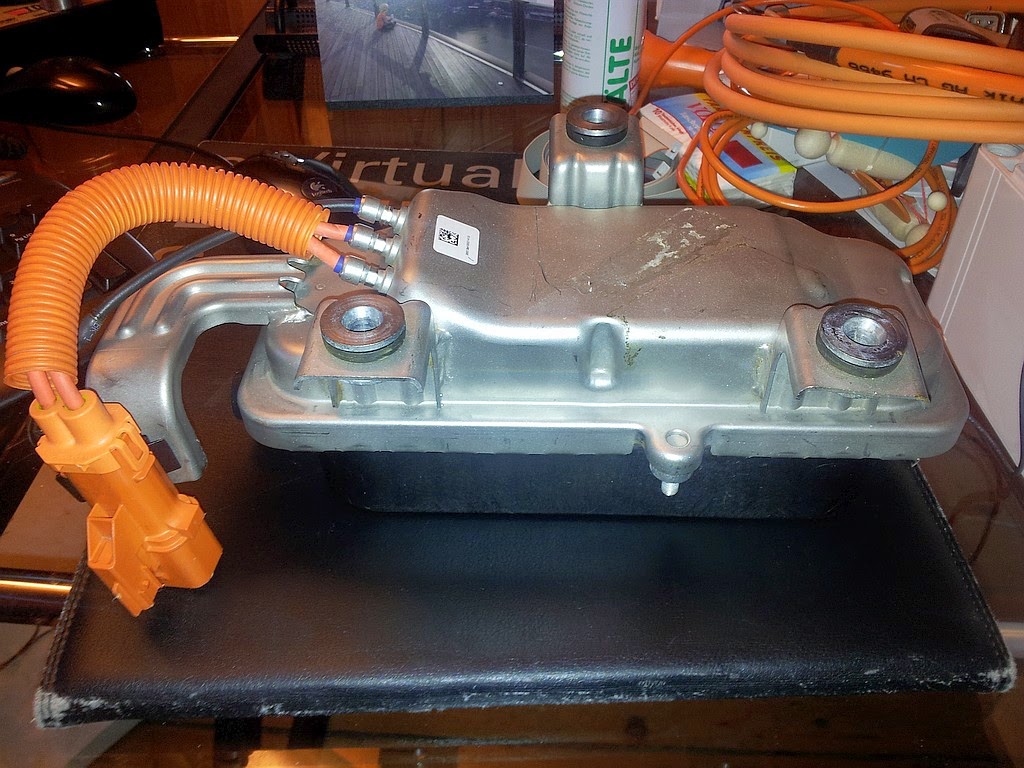 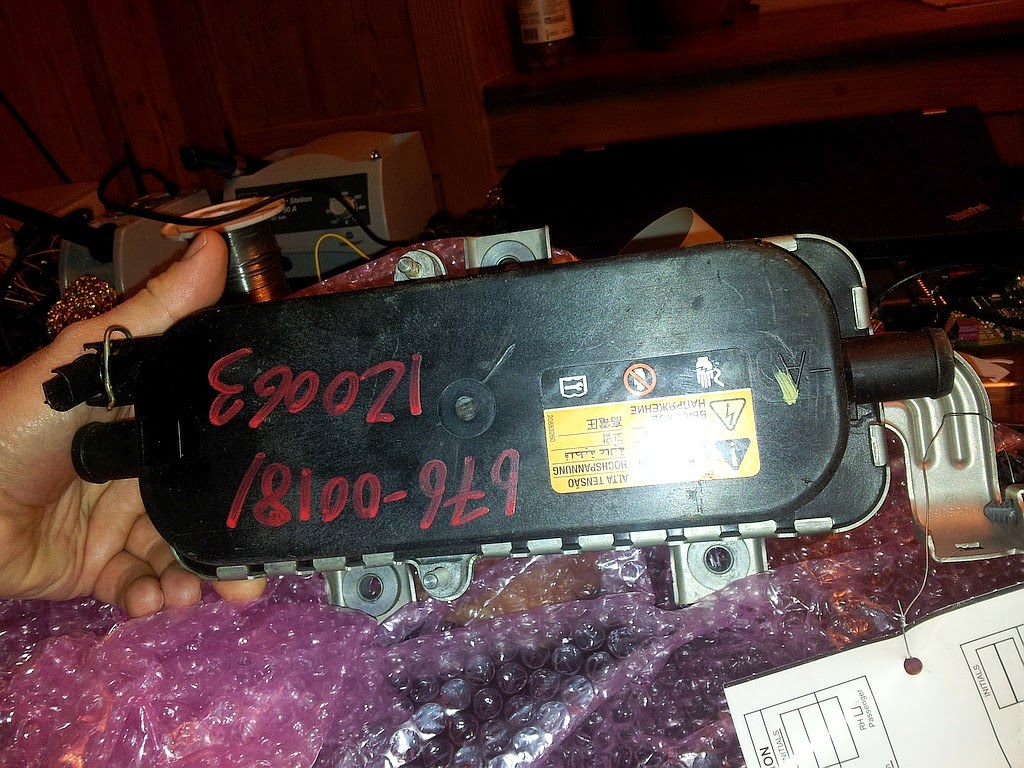 I obtained a used Eberspächer coolant water heater from a Chevy Volt with the help of Jack. It's a powerfull little box that heats with up to 6kW. It uses PTC elements where the water flows around. It's controlled via a single wire CAN. Mark Weisheimer got it running already with a play-back of recorded CAN messages from a Volt. He and others are trying to reverse-engineer the CAN messages.