On May 20th at 14:30 the 2 hour long road worthiness test was conducted at the "Strassenverkehrsamt Zürich" (road traffic licensing department). Oh boy, I dreaded this moment. That's where all my efforts could have gone to waste. I feared that they'd find so many problems that I'd have to start over or give up. That's also why I involved the experts from the beginning, discussed my design and finally got a remark that if I'd follow the design, would not increase the power of the motor, not change anything in the chassis and keep all the security relevant systems running, I could get along with my conversion. But still I had so much doubt because the standards of road worthiness are extremely high in Switzerland (you folks in the US or AUS probably can't imagine). It was the sword of Damocles hanging over me during the last 3 years. But apparently all the worries were for nothing. I got a pass on all points except these three:

Nr. 2 and 3 are a piece of cake: Switch of regen for a while and have the alignment adjusted in a shop once the weight distribution is clear. But Nr. 1 is a bit a challenge. Either I have to move 50kg of batteries from front to back ("why only 50kg, you said 70kg ?"- yes, but mind the law of the lever) or I have to get a warranty from Volvo or a testing center that it's ok to go with a bit a higher load on the front axle.

Well, moving the batteries would be my last option because it'd mean a couple of days work again and giving up space in the trunk (which I was able to prevent until now). But there are other S80 models out there with higher load limits. One is the one with a V8 engine. It's got 120kg more on the front axle than my modell.. but except from maybe stronger springs, all the same parts are used. A confirmation from one of our two testing centers in Switzerland is just crazy costly: one charges fees starting at CHF 650.- and the other 3000.- for looking up their files and talking to the licensing department. Not an option! My hope now lies with Volvo. The homology provider of Volvo Switzerland contacted Volvo for a warranty confirmation that it'd be ok to go with 70-120kg more on the front axle. So please, please Volvo Europe/Worldwide/Sweden/Switzerland, provide me this 1-pager and your stamp on it !!!

I have to mention that the experts at the licensing department were really very friendly and supportive. I even got high praise that this was the most beautiful conversion of an electric car they've seen until now. I was dumbstruck by such a huge compliment from those who take the most detailed and professional look at the car. But albeit these issues exist, I was allowed to drive the car. I just have to fix them within a certain timeframe.

My family accompanied me. My son (8 years) even got the afternoon off from school to be part of it. When we we were through with the test I was churning the fact of the overweight. But then suddenly it dawned on me:

Oh, we had a big family party on the way home - with monster ice-cream servings until everybody was full..  even the 4 year old gal :) When we passed a gas station I told them "Look folks, we don't have to stop there anymore." and after the next turn there was a barn with a huge photo-voltaic installation on the roof and I said "From now on, that's our gas station !".

The most touching thing about this whole story is how proud my son is of me. He keeps telling everybody, explains at school what I've done - and you see it in his eyes when he looks at me. I most likely don't get the full grasp of the impact it has on him. I'm not the type who's terribly proud of what I achieved with the conversion but what I'm really, really proud of is that I was able to show him that it's worth to stick to something. Even if it takes 3 years, you can reach a goal and change the world a bit. I have a feeling that this might be one of the biggest lessons I was able to teach him.
Eingestellt von Unknown um 22:25 Kommentare:


Let's wrap-up things, shall we?

Since the last post, I've invested a lot of time to get the car street worthy - honestly, I've had enough of tinkering and toying around. I wanted it on the street, I wanted to use it in my daily commute. In this post I'll collect all loose ends which I did not report about yet up to a stage where I dared to address the testing center and book a date for a (first) inspection. 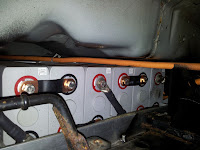 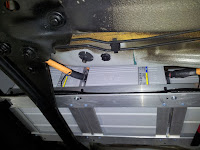 Well, the front battery box was installed, the carriage for the batteries under the car as well and I even installed a crate for the batteries in the trunk. All well. But what about water, dirt, debris and salt spraying up from the street? How to protect these poor cell terminals from corrosion? Well, I had a plan from the beginning but with the help from Matthias from www.fahrzeugausbau.ch it got even better: I wanted to add a PE (Poly Ethylene) plate as main shield and just fill all gaps with construction foam - you know, this yellow sticky mass which extends by a factor of 3 or more. Matthias suggested to also use PE foam. He provided me with a load of cut-offs from his construction work and man, did it come in handy! Not only was I able to easily secure the cells in the construction, but I also filled up the major holes. So I had to use less construction foam instead . Well, I still used 4 bottles - but mainly due to my unprofessional handling.
The PE plate was also fabricated by Matthias and together we created an attachment system to hold the plate in place. The plate is 6mm thick and is able to hold of 9mm bullets. So we have enough protection from stones and debris. I wonder if Tesla's shield would hold up against a 9mm bullet :)
I know the yellow construction foam looks scary and ugly at first. But once you cut it down with a knife to the right proportions and paint it black with bitumen spray, it just vanishes. And together with the PE foam I was very cautious not to miss any spot and get all gaps filled water-tight. Well, at least spray water-tight :) (see last three pictures)

Some impressions from my HV cabling. The first picture is probably the most noteworthy and it's also provided in a higher resolution so you get a glimpse on how the HV distribution was created. On the left side you see the red distribution bars for HV+ and on the right the black copper bars for HV-. Between the red ones you see two contactors. The left one's the secondary HV contactor. It closes after the HV contactor in the trunk did engage and the pre-charge cycle is completed. The right one will be used for fast charging via Chademo in the future. In the middle you see an HV relay which connects the green resistor for pre-charging. And on the lower right you see the shunt for coulomb metering (AH). The HV box is mapped pretty much 1:1 in the control diagram. 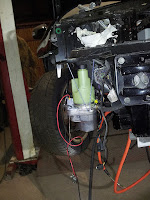 This beast is a bit the bad boy in the car. In emergency mode (no CAN control messages) it's power is barely enough to keep the electro hydraulic power assisted steering running for my heavy S80 - but more annoying is the humming noise it creates. Even packed into foam rubber and covered by the front bumper, it creates too much noise for my taste. I started thinking about using the emergency brake switch connected to GEVCU to switch off the pump - so it'd be more quiet in a traffic jam. But with some music it's ok. (I'm oversensitive, I know.. it's just that the pump destroyed my fantasy of an absolutely quiet car). 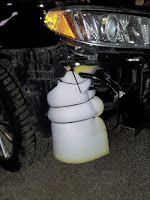 But the worst thing is that although I bought this pump via an official retailer, I get absolutely no support. Not even a CAN matrix or guide.. or just even a CAN ID. Same old song from the manufacturer TRW : no support for non-OEM's... #@&##@ !!!
I could live with the first two draw-backs but the third one brings me to the point where I'd definitely not recommend this pump. Shame on you TRW - you're actually the only player in the whole game who gave absolutely no support for your 600.- pump.

The GEVCU is a great piece of hard- and software. Especially with the WiFi chip and the web-interface Charles Galpin and I created for configuration and monitoring.. I just love it and people freak out when they see it displaying 10 values with gauges in real-time. But it has some drawbacks:

To resolve this issue, I created a GEVCU Extension board and software based on GEVCU's code. It's based on a 16-channel 220V relay board you can order for under $20.- on ebay, an Arduino Due and a self-made shield which holds a CAN tranciever, a SW-CAN transceiver and an EEPROM to store config values like GEVCU.
GEVCU communicates via CAN bus with the extension board and tells it to engage the pre-charge relay, the contactors, start the heater or coolant pump and fan. And in return for that, the GEVCU extension board reads temperature and water flow measurements and reports them back to GEVCU via CAN also. There are also some safety features built in so should the two boards get out-of-synch, the HV contactors will be released or not closed at all (state machine on both boards).
I also created one last video before hitting the road from some old dusty recordings. 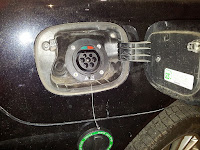 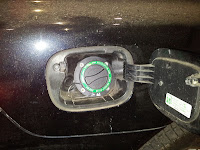 The only place the connector for charging should go is of course where you used to hook up the gas nozzle. A friendly fellow by the name of Andre Te Sla (no joke !) runs the company www.electroscout.ch. He was able to provide me with a receptacle which fit in perfectly and also a 1-phase charging cable that I can hook up to the car and a red CEE-16 plug. I created myself some adapters for CEE-32 and Swiss household sockets. Works like a charm. All that's missing, is the 880 Ohm resistor between ground and a 12V PWM signal provided by official charging stations so the signal goes down to 6V and the charging process starts. But until now I was happy with dumb 230V sockets.