We caught some fame... another fellow EV enthusiast organised an interview with our local newspaper. Inspired by it, I thought "Why not try others?". So I informed all major Swiss newspapers and TV stations about the completion of the conversion. Zurich's local TV station (Tele Züri) reacted extremely quick - after 5min I got a call. The reporter showed a lot of interest at first but then the redaction was not convinced that 5 to 10min of interesting material could be cut together. Well.. although I could have talked for hours, it's not a major problem because after that, the biggest newspaper in Switzerland jumped in for a half-page interview and they even posted a video on Facebook (in swiss-german though).
For those interested, here's a translation:
Intro: "This Volvo in not only driven electrically but also home made. Michael Neuweiler fulfilled his dream with this car."
Michael: "Driving for the first time out of the garage and only hearing the crunching gravel under the tires and nothing else, this was fantastic - a really good feeling. Especially because I invested a lot of time and it worked in the end."
Reporter: "Why did you want such an electric car? Why didn't you just buy a Tesla?"
Michael: "When I started, the Tesla S was all but a rumor and it looked like it takes longer. Other electric cars were only small cars which I didn't like that much. So I thought, let's try it ourselves with the car I like."
Reporter: "When did this start and what was the catalyst for you to start the construction?"
Michael: "In 2013 I saw the film 'Who killed the electric car' and there it was explained how GM had a good car, the EV1, which was very well accepted be the customers but as soon as they were able to kill the law in California that 1% of the imported cars had to be emission free, they stopped everything, fired the employees, recalled the leased cars and scrapped them. So they scrapped 1-2 year old cars. At that time this stirred up a lot in me and in the end led to the point where I wanted to build such an electric car."
Outro: "The Volvo accelerates in approx 7 seconds from 0-100kmh. Not as quick as a Tesla Model S but sure not a lame duck."
(small correction: it's more about 10 seconds but I didn't know better at that time..)

All in all an interesting experience. Some folks address you after that. Recently my wife rented a music instrument for our son and the salesman asked her: "We do tune your piano, right?" - "Yes." - "And your husband did this electric car conversion?".
But now the thing is mostly over.. except for my father who's extremely proud of my achievement and shows the news articles to all his visitors :) But my biggest fan is still my son. In a more troubled episode with the car (more on that in another post) he surprised me with so much heartwarming compassion, it brought more than a tear to my eye :) 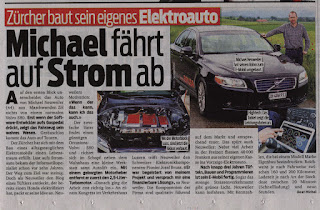