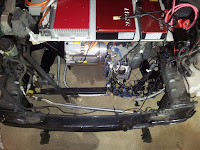 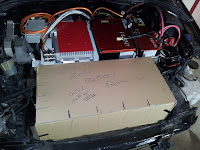 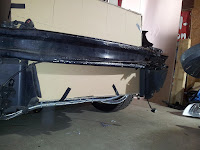 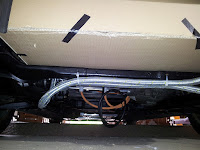 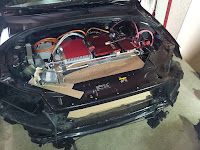 Huh ? What's that supposed to mean? A depression because of battery boxes? Well.. yes and no. The reason why I didn't post for so long albeit I was celebrating a big breakthrough is the following:

As noted in my last entry, the work wasn't done yet. After the "high" from the first ride it was hard to get back and get dirty. It was more fun to take the car out for a quick spin. Then summer came, it got really hot and who wants to work in a garage with sweat dripping from your forehead at 40°C? You'd rather go to the public bath with the kids, right? Yeah.. well, all nice excuses which of course also played their part. The truth is, I got mentally blocked. I found a nice solution for the front battery box. But when placing the cardboard prototype in the engine bay, I found out there's a crumple zone which I never thought of. The beams carrying the front bumper do have some clearly visible notches which are intended to allow an easy compression and energy absorption in case of an accident. My box would fill out this entire zone with 150kg of batteries.
A friend recommended to check with the vehicle inspection first. They said that they see it as a critical topic, I should check with one of the certification agencies. They too said "It's critical" and sent me 60 pages of guidelines "Regelung Nr. 100 der Wirtschaftskommission der Vereinten Nationen für Europa (UNECE) — Einheitliche Bedingungen für die Genehmigung der Fahrzeuge hinsichtlich der besonderen Anforderungen an den Elektroantrieb", the so called ECE 100. On one page it says that either a crash test or a force equal to several tons has to be handled by the construction. Heck, how am I going to do that? I don't want to destroy my car nor any of the battery cells! I didn't get a official advice so I started thinking of alternatives. I'm not blaming any of the official agencies. Everybody was really supportive but as it's a special case probably nobody exaclty knows how to deal with such requests. All of my alternatives that came to my mind resulted in a complete re-design of the electric installation. A possibility would have been the placement of batteries behind and above the motor. But then I'd have had to move the HV-Box and all the Brusa devices to the front. A major redesign I wasn't looking forward to and which didn't promise much more success in the end.
I was sitting in the garage for hours - under and in front of the car without actually doing anything than brood and loose motivation minute by minute, not seeing any way to pass certification.
Then fortune sent me a favour: A friend gave me a nicely cut out article from a newspaper. It was about a guy in Lucerne who converted a '57 Chevy pick-up into an electric vehicle and even more: He created a professional system allowing him to use his car as source of electricity for his house, charge it with solar power and dynamically change the amount of electricity delivered from one system to the others - multidirectional. Probably the first system that works in real life and is not just some power point presentation. He's located a 30min drive from my home and also was so kind to receive me last week to explain everything he did. Result: 4 hours of techie nerd-talk :) The system he created based on Siemens technology is a real piece of art. In his garage he controls the whole system over a 17" touch screen - ease of use, statistics, full control- it's all included. But to me personally the biggest revelation was how he successfully passed inspection and got his Chevy street legal. It was a mental break-trough which made me decide to go ahead with my original design. But no, it's not 3 months lost, I also got very good advice where and how to obtain good quality battery boxes. He had his boxes created in a company located in Baar (15min drive). They're made out of welded plastic plates. The plastic and the connections are extremely robust, fire retardant and of course not conductive. Much better than any metal based construction. He told me that they made a L shaped test object and drove over it with a car. The object flattened out but did not break and restored its original shape once the force was gone. It's lighter than aluminium and can take many colours. Once I know more about it, I'll post more details.

I also bought myself a TWR JER 161 hydraulic pump used in Volvo V50. It should be possible to run it in uncotrolled mode but if you're able to send the right CAN messages, also make its power output speed dependant. It'll go into a compartment in front of the right front wheel - just like in a V50. Another device to be controlled by the GEVCU ? ;) More details can be found on DIY electric car forum.