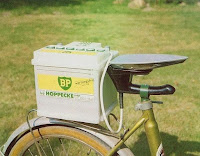 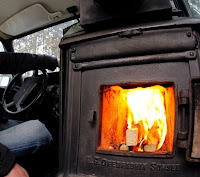 It's getting cold and although the car is running and I finally passed the re-examination of the car, the heating from the coolant of the motor and inverter is not only insufficient - it's inexistent. The coolant temperature rises to about 21°C after a 40min drive which doesn't heat the cabin at all. (So folks, it really doesn't work to heat the car with the heat of an electric drive system!) And with an outside and inside temperature of -3° to 2°C - which is not the lowest yet - my feet are cold and won't recover for 2-3 hours after these drives.

So a heating strategy must be implemented urgently. Although the approaches depicted on the right might work, I think I'll try a different approach. (note the funny coincidence: a BP logo on a battery)

I wasn't able to activate the already installed PTC heating element of the Volvo until now. The signal specs and wiring diagram pointed to a wire which regulates the power of the PTC element. I thought it was an analog or PWM signal which I tried to fake. But it didn't work. Most likely the PTC controller communicates via LIN bus messages. So it's not easy to fake it without a reference.

So maybe the best idea would be to get the already mounted but not connected Eberspächer 6kW heater working. I only have to connect hoses, a pump and an expansion tank (which I don't have yet) and find a way to read the temperature from the heater's sensor (analog signal) with GEVCU or GEVCU-Extension.