The Heat is on! 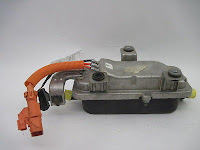 Finally, I got the Eberspächer 6kW electric heater installed and up and running! It sure is a beast that needs to be tamed :) With my current water flow rate it starts boiling the water with anything higher than 2.5kW. When the blower of the car is off, bubbles even start circulating the system with 1.5kW. I equipped my GEVCU-Extension with a SW-CAN transceiver. It communicates via single wire CAN bus with the heater and controls its power output from 0 to 6000 Watts. The module of course can be configured to a desired maximum power output. It also measures the temperature of the water via a NTC resistor built-in the heater (via A0 of GEVCU transmitted via CAN to GEVCU Extension).
With the current settings, it heats with 1.5kW until the water reaches 40°C. Then it de-rates the power to 0 Watt at 70°C. This reduces the bubbling to a minimum.


I'll need to hook-up the already installed flow meter to get an idea of how many liters per minute travel through the system.

If you're interested in the code, you'll find it at GitHub. (Note that not all Eberspächer heater use SW-CAN. Many operate PWM controlled).

After 4 weeks driving at freezing temperatures (inside the car), windshields that fog up and even start to freeze over while driving, feet that won't warm up again and catching one cold after another, I'm almost looking forward to the Monday morning commute where I can hop in a pre-heated and de-iced car.

PS: Of course I didn't drive with iced/fogged windows.. I stopped and used a 12V 120 Watt heater and wasted a lot of time pointing the cheesy air flow at the windshield to get clear vision.

Before getting the heater running I had to fight some other heat - caused by a still missing radiator for the coolant loop of the motor and controllers. I had to get to Arosa this week. It's a mountain village in the canton Graubünden, Switzerland at 1775 meter over sea level. The town at the base of the mountain (Chur) lies at 593 meters. So the task was to climb 1182 meters (3877 feet) over a distance of 35km (21 miles) with most of the height gain concentrated in the first 4km. After 120km on the high-way I had about an hour to charge with 3.7kW at Chur until I had 30Ahrs in my batteries. Then I had to take off to get to Arosa in time - or not at all. The car climbed like a champ at first. Until I hit a temperature of 133°C in the motor and the de-rating set in. Fortunately the terrain leveled off and it cooled down quickly. Just when I finished contemplating about finally installing that radiator for the coolant, I got another blow when I looked at the Amp-hours meter: 15Ah left.. for about 32km remaining. That's gonna be extremely tight - especially if we have to climb even higher. I used my "super-energy-saving" driving style and got really nervous when the Ah meter went from positive numbers to negative ones and the street just went on upwards - pretty steep. But the voltage didn't sag as I expected and it finally dawned on me that I aligned the meter to 20% SOC. So theoretically there should be another 20% reserve in the batteries to complete the trip to Arosa and not turn around with a tucked tail. Constantly checking the voltage I drove the remaining 5km and ended up with minus 3.5 Ah but still a sufficiently high voltage in the cells. Phew.. that was "interesting". But I was proud we made it - barely but we made it :)